According to a report by Defense One, an FBI hostage rescue team was just settling in to carry out surveillance of an unfolding situation when a swarm of drones started buzzing overhead.

The drones quickly ratted out their position to the suspects under surveillance and scuttled the whole operation. The suspects went as far as to transmit live drone video of the agents between each other via YouTube to monitor their activities.

We could be reading more of such news reports in the near future.

Amidst the rapid rise of consumer drones in the last few years we have mostly ignored their dark side. We have neglected to talk about the nefarious purposes they can be used for.

But it’s important to remember that as drones become more and more convenient and useful in everyday applications, they also become more useful to criminals. The same tools – video cameras, swarm technology, live video transmission – that have made them indispensable are also granting criminals new opportunities to commit crime.

Take camera drones for instance. They have only gotten better. A good example is the recently released DJI Spark which is a personal drone that can take photos or videos that are just as clear as those from a professional camera.

With a small but powerful drone like that, criminals can fly practically anywhere they want and spy on anyone. Even smaller beginner drones costing less than $100 now come with good quality cameras, allowing any criminal to watch over their targets, plan crimes and escape law enforcement.

The Defense One report says that some criminals are using drones for witness intimidation. They hover near police precincts to see who is talking to the police.

Other criminals are using drones to case private homes and pick the best ones for break into. From the air they can easily pick out weak spots such as a skylight, a patio door or an unsecured window.

Some criminals are also using drones to spy on bigger targets like banks or institutions to learn patterns and identify weak spots.

In Australia a smuggling gang has come up with a creative way of avoiding detection. They monitor port activities with a video camera drone. Whenever port authority officers appear to be about to open a container with illegal contraband, they will trigger a fire or security alarm to create a diversion. 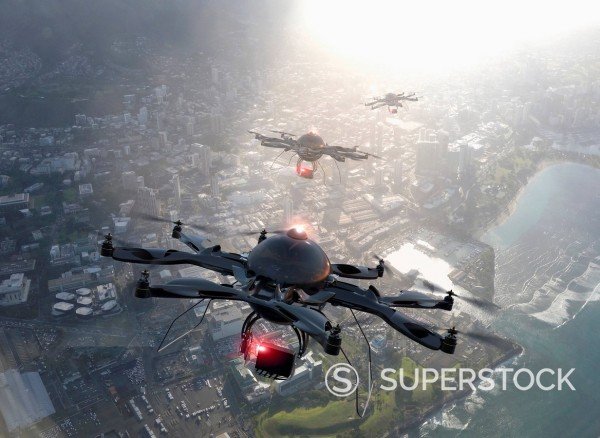 The threat goes beyond local criminals using drones to spy on their targets and the police. As drone technology grows there is a real risk of weaponized drones.

One of the developments that is raising concerns is swarm technology. Companies like Intel have managed to synchronize thousands of small drones to create dazzling light shows.

It’s easy to see synchronized drone swarms being turned into weapons against law enforcement, individuals or even as a way to disrupt public order.

Just read this news report of how a swarm of 13 drones armed with explosives attacked a Russian Military airbase. The attack was unsuccessful but offers a scary preview of what we could be dealing with in the near future.

The recent FAA reauthorization bill has two new clauses that recognize these dangers.

One of them makes it an offence to weaponize consumer drones while the other requires drones flying out of the operators’ direct line of sight to broadcast their identities.

But preventing criminal use of drones is not as simple as adopting a couple of laws. Just look at the increasing number of reports about drones flying too close to airports or airplane. Yet, the FAA is very strict about stuff like that and you could even land in prison.

What will work better is new technology to counter the growing threat. The good news is that drone companies like DJI have been working with government agencies to find tech-based solutions.

DJI already has a geofencing feature that automatically locks its drones from certain locations and warns the operator if they get too close to others.

They also have a new security system called Aeroscope. It automatically recognizes drones flying within a certain area and shares their identity with law enforcement. DJI has already deployed it at some airports.

Not all these solutions work perfectly and criminals can easily find workarounds. But there is a lot of progress going on.