Few people expected the consumer drone industry to grow as rapidly as it has. Even fewer had any idea how important consumer drones would come to be in crucial areas beyond hobbyist flying.

Businesses, organizations and even government agencies have used drones in numerous ways, some of them life and death. One area where drones are quickly proving invaluable is in firefighting.

In March this year, firefighters in New York City used an $85,000 drone equipped with infrared and high definition cameras to battle an apartment fire in the Bronx.

In a statement, the Deputy Assistant Fire Chief Dan Donoghue said, “The roof started to fail and we had a lot of great radio reports, but that’s only verbal, so with the drone we had good visual pictures and it really helped us make decisions to put this fire out and keep our members safe.”

This scenario is being replicated in many cities. From wild fires to building fires, firefighters are deploying top drones to help fight dangerous blazes and save lives.

So how exactly do these drones help fight fires? Most of them obviously don’t have the capacity to carry gallons of water to extinguish large fires. There is however plenty they can do with their on-board cameras and bird’s eye view.

These drones are usually equipped with standard high definition cameras plus infrared cameras. The standard cameras capture live images and send them back to the firefighters on the ground, helping them keep an eye on vulnerable areas.

The infrared cameras can peer through thick smoke and walls to identify hot spots that firefighters should either keep away from or deal with immediately.

And it’s not just building fires. Drones have been immensely helpful in taming wild fires in places like California and Oregon.

They can monitor the situation from a high vantage point, thus giving firefighters an upper hand in dealing with the situation. For instance, they can quickly spot small fires that are then extinguished before they grow out of control.

Essentially, firefighters have gained an extra set of ultra-powerful eyes that not only help fight these blazes but keep their members safe. 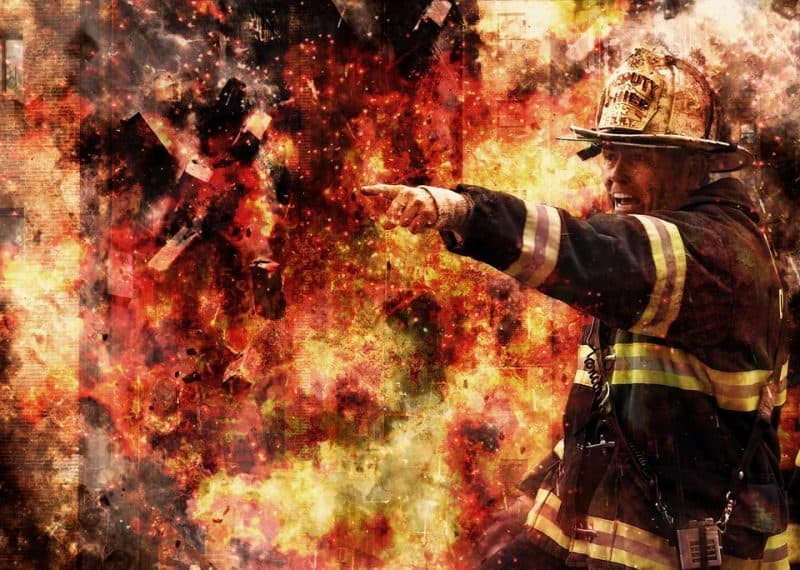 Recently, DJI launched a drone flight operations management platform called FlightHub. To test it out, they had been working for months with Menlo Park Fire Protection District.

The platform’s biggest benefit, according to the Menlo fire chief, was the improved ability to plan and coordinate the efforts of their fire fighters.

In a lot of fire hazards, being able to work efficiently together is often a matter of life and death. As the New York City Assistant Fire Chief put it, verbal communication is usually not enough.

Drones enable better coordination and planning. Using their on-board cameras, they can relay live imagery of what’s happening in different parts of the area or building. Decision makers on the ground can then direct firefighters in a way that allows them to battle the fire quickly while staying safe.

In a raging wild fire, things move fast. Homes that weren’t anywhere in the line of fire are suddenly being evacuated. Winds can change direction of fire unexpectedly and put whole towns at risk.

Firefighters and police in vehicles often have a hard time getting people to safety. Helicopters are not always available and even when they are, they may not be able to fly because of the weather or smoke. That’s not to mention how expensive and dangerous they are to operate in a fire.

Drones are excellent for search and rescue. They can fly in poor conditions, even through thick smoke. They can fly through crevices and trees to find anyone who may be trapped. Furthermore, they don’t put any pilot’s life at risk and are relatively cheap to deploy.

In the future, we will see coordinated drone swarms that can provide wider coverage especially in and around wild fires.

Drones are useful when inspectors need to check the aftereffects of a fire in areas that are still too dangerous for firefighters to explore. In the case of a wildfire, there could still be hot spots or small fires that need to be dealt with immediately.

Even insurance companies sometimes deploy top drones to access the severity of damage to homes and businesses.

Beyond firefighting, government agencies and organizations are using drones in many more life-saving ways. These include monitoring hurricanes, anti-terror operations and general search and rescue.

As drones get more advanced, expect many more uses and many more lives saved.