Every drone user’s worst nightmare is crashing their expensive drone. It requires dozens hours of drone training to skillfully pilot a drone without risking a $500 plus repair bill.

There are many types of UAV training programs and platforms that can help you get better at drone flying.

These include web and app drone simulators that attempt to replicate the actual drone flying experience.

But there has never been a simulator program as realistic as the one recently developed by Epson in collaboration with DJI and Y Media Labs.

Epson is a Japanese electronics company best known for their range of printers. Y Media Labs is a technology and design agency.

Together with DJI, they have created a simulator application that uses augmented reality (AR) to provide a hyper-realistic drone training experience.

The application, which will be available later this year, is designed for use with the Epson Moverio BT-300 smart glasses.

The BT-300 glasses are not new; they were launched in 2016. But the AR application to go with them has been in development throughout the year.

DJI and the Moverio team from Epson worked with Y Media Labs to develop the applications specifically for the BT-300 glasses. So don’t expect to use it with your own AR glasses.

The app creates a 3D projection of a drone using the BT-300 glasses. Here’s a short video demonstration.

You can fly (virtually, that is) any of the latest DJI drones using an actual DJI flight controller. The virtual drone mirrors the movements of a real physical drone. The same way you would fly a real Mavic Pro or Spark is exactly how you are going to do it with the flight controller.

These realistic movements are very important for non-experienced drone users learning how to control a drone. You can practice different moves and tricks in a variety of situations. The best part is that you can do all this without any fear of crashing or causing an accident.

With lots of practice you’ll get close to being able to fly a real drone. Combine it with on the ground drone training and you’ll be ready to fly on your own.

In addition to a Fly mode, the app will come with two mini games for users who want more intensive practice. You can also play the games just for fun. There will also be a multiplayer feature. 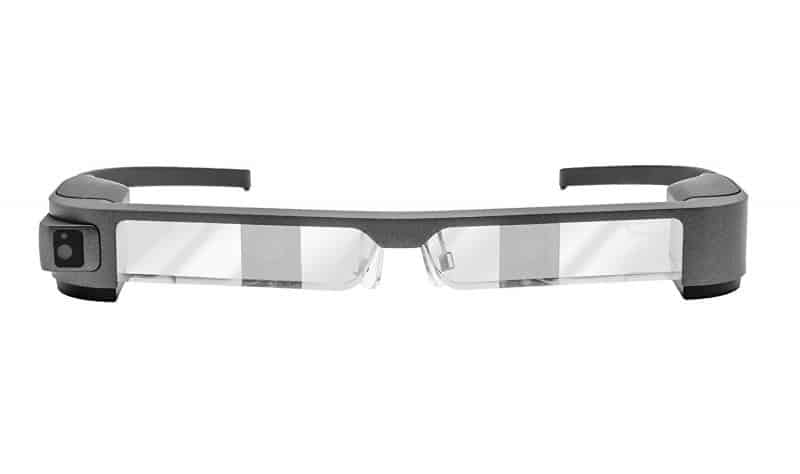 Epson has actually been working with DJI for over a year now to create exciting new FPV experiences for DJI drone flyers. DJI has marketed the Moverio BT-300 glasses as an accessory to some of their drones.

So the new AR app is just the latest in a series of efforts to help UAV flyers get the most out of the BT-300 glasses.

One of the biggest advantage of AR glasses, as compared to FPV headsets, is that you can maintain a direct line of sight to your drone. Most countries, the USA included, have strict rules about having the drone in sight at all times when you are flying outdoors.

AR glasses allow you to adhere to those regulations. The BT-300 glasses display a live video feed from the drone plus real time flight statistics without blocking your line of view.

The glasses, which are available in a wide range of prescriptions, integrate with the DJI GO app to offer a seamless first-person view experience. They come with a controller that can be easily attached to the main DJI drone remote control.

Right now, only the BT-300 glasses are available. You can get them on Epson’s official website or Amazon for around $700.

Users will get the app later this year in the Moverio Apps Store. No prices have been announced.

If you want a taste of the simulation, various DJI stores as well as local drone retailers are offering in-store experiences.