One of the goals of drone companies like DJI is making drone flying as simple as possible.

Using a wireless controller is still the most common method of flying a drone. But manufacturers have added all sorts of features to make drone control easier.

Take DJI drones for instance. They have automatic obstacle-detection and evasion technology as well as different intelligent flight modes.

You can shoot a full video or take pictures without having to touch the joysticks.

A new type of drone technology is promising to make drone control even easier and eliminate the need for intensive UAV training.

Developed by experts from the University of Pennsylvania, New York University and the U.S. Army Research Laboratory, the new technology uses eye movements to guide the drone.

The idea of controlling drones using your eyes is not new.

This one stands out for its simplicity and lack of dependence on external equipment.

Other gaze-controlled drones rely on external sensors to detect the position and orientation of the user as well as the drone.

This one is completely self-contained.

You only need a pair of Tobii Pro Glasses 2. 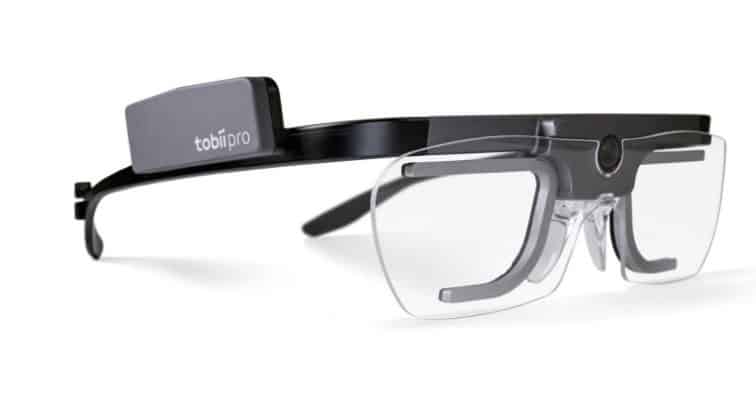 The glasses have eye-tracking cameras, a wide angle HD camera and an inertial measurement unit (IMU) consisting of an accelerometer and gyroscope.

Because the glasses don’t have a lot of processing power, they are connected to a portable computational unit, the NVIDIA Jetson TX2 Module.

And that’s all you need plus the drone of course. No controller required.

You start by looking directly at the drone. The glasses follow your gaze and use artificial intelligence to identify the drone.

They then calculate the position of the drone and its distance from you.

After that, you just need to move your eyes to a specific location and the drone will follow.

The cameras in the glasses track your pupils’ movements that are then translated into actual navigational instructions for the drone.

All the while, the glasses keep tracking the drone’s position and orientation.

The system works surprisingly well as you can see in this video.

The biggest challenge for researchers has been translating 2D eye-tracking information to 3D waypoints.

It’s easy to determine whether your eyes have turned left or right and calculate how far in either direction the drone should fly.

Calculating depth is another thing.

The glasses can’t really tell whether you are looking at a spot that is 30 feet or 20 feet away. This is a big problem since the drone can easily fly into a tree or the side of a building.

But researchers hope to solve this problem soon.

If the technology works well in real life, there are many potential benefits.

On obvious one is that novices will have a much easier time flying a drone without having to go through extensive drone training or years of practice.

Using a drone controller is not very intuitive to a new drone owner and it’s easy to crush a new drone.

Eye-tracking technology will make drone control as easy as looking where you want the drone to go.

It will also be of huge benefit to people with disabilities.

If for some reason you cannot use your hands, a conventional controller is out of the question. That locks many people out of flying a drone.

With eye-tracking technology, you can fly a drone as well as anybody else.

Researchers are not planning to stop at eye-tracking technology.

They hope to add other controls methods that use gestures and voice.

These modes will not only control the drone’s navigation, they can also be used to adjust various settings and control the camera.