The release of DJI Mavic 2 Zoom Thermal Drone comes as good news to workers in the emergency services sector.

Drone Doctor’s new offering promises to be a  replacement of DJI Mavic 2 Enterprise Dual and DJI Matrice 210.  These two drones are currently the best compared to other brands in the drone industry.

The new DJI Mavic 2 with the FLIR Boson Thermal Camera is a drone created and customized by Drone Doctor.

The Drone Doctor is a UK based company that mostly handles repair work for DJI as they are a recommended service center.

Their trained technical staff is certified in the DJI factory in Shenzhen, China. So, in other words, these guys know what they are doing!

The FLIR Boson Thermal Drone consists of improved features such that it can perform additional functions compared to other drones.

It also has new features that make it outstanding and a force to reckon with in the drone industry. There are different types of drones, and they play different roles such as photography and video shooting.

The following outline gives you details about this new thermal camera drone that include services, key features, as well as pricing.

The thermal drone camera has a specific design for sensor-based aerial surveys. It is ideal for law enforcement officials, first responders as well as firefighters.

The law enforcement agents can use this new drone for surveillance since it can reach inaccessible places.

Law enforcement agents were unable to reach certain areas due to factors like physical barriers.

In such a scenario, this is when the drone comes in handy since they can dispatch it to any place. The drone also has a camera with a high resolution that helps to capture quality images and videos. 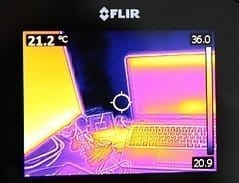 The thermal camera with a higher resolution also helps the firemen to deal with various emergencies. During a fire outbreak, the firefighters need thermal cameras to identify its source. A thermal camera works well especially in a situation where naked eyes cannot see properly.

The Bosom camera drone is also good for search & rescue operations in case of accidents or other natural disasters.

When disaster strikes, it may be difficult to search and rescue the victims due to the risk involved in the operation. The thermal camera’s high resolution helps the rescue workers to identify the victims quickly.

The new Mavic 2 Zoom drone is also ideal for agricultural purposes. It can reach vast areas of land on your plot, and it is convenient. You do not need to conduct a physical inspection of your farm since you can use the improved drone to perform the task.

The primary feature of the Mavic 2 thermal drone is the Boson 320 camera. The thermal camera is on the original gimbal, and it comes along with the optical zoom original camera. The camera consists of a 6.3 mm lens, and it offers a 34-degree field view.

The rescue workers can detect human beings from a distance through the use of thermal heat. The Boson 320 also helps provide better thermal image quality compared to the M2E Dual.

However, the only missing feature would be the FLIR MSX. IT allows you to view visible and thermal light as an image combination in real time.

The new Mavic 2 Zoom Drone comes with features such as buttons and physical knobs on the controller. These physical features help to change the color palette as well as the thermal camera’s digital zoom. Other features include the safe mode that allows changing specific functions of the thermal camera.

However, the new drone works similarly just like the normal Mavic. The only change comes when you press the button, and it then switches to a thermal image. There are also no extra monitors, extra batteries and there are no spare parts.

The new Mavic 2 Zoom Drone has some disadvantages that you should know. The drone was designed in such a way that the Mavic’s system cannot detect any new changes. There is no need for modifying the firmware on the drone.

In other words, the new drone maintains the old operating system and the firmware updates cannot cause problems. There is also no reason for modifying the app since you can continue to use DJI Go 4.

The other issue is that the Boson sensor is not radiometric.  The solution can only record one answer at a time instead of both visible and thermal light footage at once like the M2ED.

The live feed set to thermal will also record a video in the form of thermal. However, the switchover is instant, and it takes less than two seconds and not a big issue.

The developers of the custom DJI Mavic 2 Zoom drone anticipate the price to be around $4,580 (3,600GBP). The price, however, does include the FLIR thermal camera, but you will need to pay any taxes that may arise.

Drone Doctor currently anticipates selling the Mavic 2 Zoom thermal drone to the UK customers only. The manufacturers can ship the modified drone to you, but you would need to source the sensor. It is easy to fit the sensor since you plug it then fit four screws.