Last year, French drone company Parrot introduced Anafi, a 4K-capable consumer drone weighing less than a pound. This year the platform saw a significant boost with the announcement of the Anafi Thermal.

At $1900 the Anafi Thermal is significantly costlier than it’s $700 consumer version.

However, it’s suitably priced to compete with the $2000 DJI Mavic 2 Enterprise. The biggest additions to the Anafi Thermal are a high-quality Flir thermal sensor, as well as custom software.

What’s in the box? 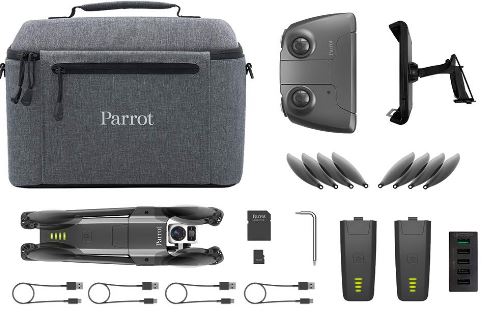 The FLIR camera works alongside Anafi Thermal’s 4K standard camera. This allows you to shift between 4K, thermal imaging, and RGB easily. The thermal imaging camera has a temperature range of  14°F to 752°F (-10°C to 400°C).

Other outstanding features of this drone are:

Parrot claims, the Anafi Thermal, can clock 26 minutes on a single charge. Considering the drone comes with three batteries, this gives it a cumulative total of 78 minutes.

For all its capabilities, this drone has an impressively compact, foldable design that makes it easy to carry and store. At 315 grams it’s also 10gms lighter than previous Anafi drones. This is impressive, especially considering the FLIR unit accounts for extra weight.

It also has a 180-degree gimbal rotation. Three axes offer stability to the drone’s standard and thermal spectrum cameras. This allows decent, clear videos even under challenging conditions.

Anafi Thermal’s Freeflight 6 app makes it easy to change views between thermal imaging, RGB, and 4K video. The app allows you to view, edit, and manipulate images captured under both visible and invisible light spectrums.

This is made possible by the Parrot Skycontroller 3, which has a reliable wi-fi connection covering more than 1 mile.

Anafi Thermal’s batteries are charged directly via a USB-C connection.

Like the Anafi Thermal, DJI’s Mavic 2 Enterprise Dual is a portable commercial drone with both visual and thermal cameras.

Parrot’s Anafi Thermal stands out in the sense that it:

These give the drone’s operators increased maneuverability and data capture options compared to competing UAVs.

Both products have a foldable, easily portable design that’s increasingly becoming standard for commercial drones. Parrot’s drone is significantly lighter than the Mavic 2 and numerous other competitors.

The Mavic 2 Enterprise Dual requires various accessories for full functionality. In comparison, the Anafi Thermal can be used straight out of the box.

Rapid developments in drone technology are making them must-have assets for various private and government entities. This particular drone enables switching from thermal imaging to RBG or even merged image at the touch of a button.

It also allows real-time thermal analysis through 3 groups of settings. The relative setting shows a scene’s full range of temperature differences. It does so by coloring it with a gradient color scale indicating the coldest to hottest parts.

The absolute setting allows you to select a temperature range to highlight specific areas. The spot setting isolates the hottest and coldest parts of a scene, which immediately allows you to spot anomalies.

Such settings enable its use in various industries. For instance, aerial thermal sensors are widely used in agriculture. They’re useful in surveying and mapping, 3D modeling, and observing the general health of crops.

Parrot’s thermal imaging drone can also be used in the following sectors:

Building inspectors apply thermography in determining which part of the building has excess heat, and where most of it escapes from.

They make surveillance, search-and-rescue, and other missions easier. A person’s body warmth will make them stand out even when they can’t be visually identified.

The Anafi Thermal drone is capable of analyzing powerlines, pipelines, and other crucial energy infrastructure. By studying differences in temperature, engineers can make more accurate decisions. 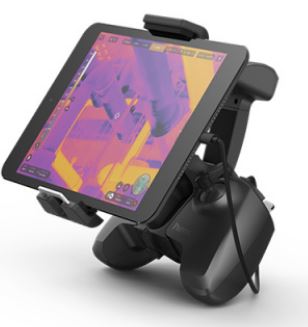 The Anafi Thermal is a solidly built drone which gives Parrot a fighting chance in the competitive commercial drone market. It remains to be seen whether it will challenge rivals such as DJI’s Mavic 2 Enterprise Dual.

It also shows that Parrot’s strategy of upgrading consumer drones for the commercial market is viable. We’re excited to see which innovative features the French company will add to future Anafi drones.