Be Safe and Responsible – Or Don’t Fly a Drone

Drones are a lot of fun to fly.

But a 10-pound object falling from 100 feet can damage property or seriously injure an innocent bystander.

This page lists a slew of practical advice for new drone operators. It also provides links to the latest FAA and other government regulations that define how citizens may legally operate a drone in public airspace. Be aware that in the US, the rules are not yet clear.

Technically, you may be able to operate freely in your town without breaking any laws. But that doesn’t mean you can do anything you want.

If you’re going to operate a drone, then you must accept the responsibilities that go along with it.

Or just don’t fly one.

Know The Rules – And The Law

In the United States, the FAA & various state and local authorities currently control US skies, and the NTSB and FAA rules for drone operation and piloting are still being developed.

Nevertheless, you are responsible for understanding the current laws and rules governing local drone use.

In addition to federal guidelines, each state has its own rules.

The legal space is changing all the time, so use Google to know where you stand. 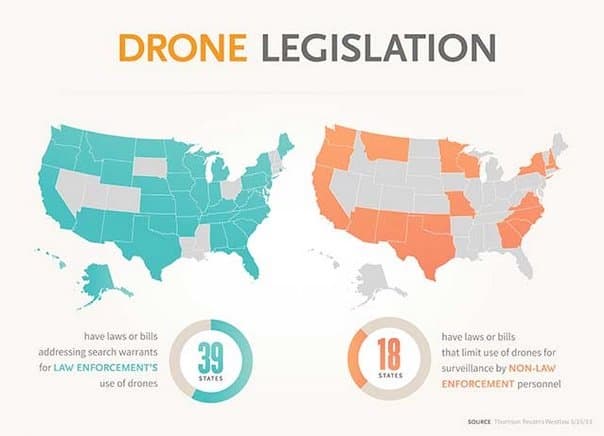 UAV Laws Outside of the United States

Check out this cool interactive map provided by DroneMate that summarizes the UAV/drone laws in each country. 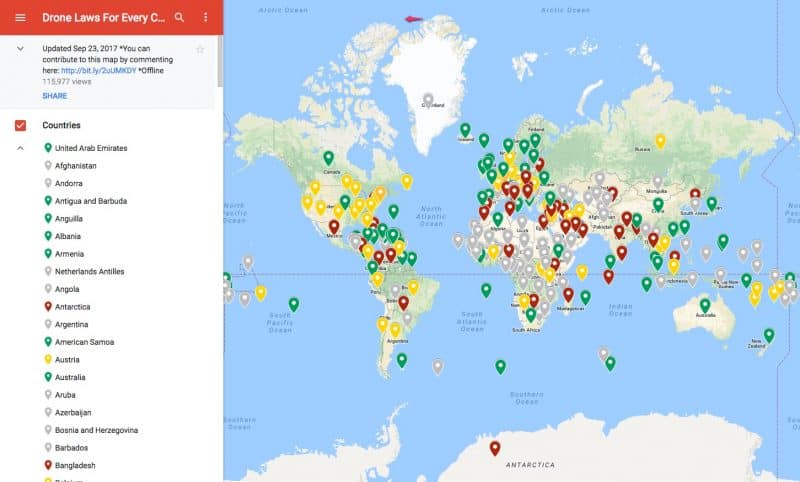 FAA finally released their rules & guidelines for operating small commercial unmanned aircraft (drones weighing less than 55 pounds). These are detailed in FAA Regulation Part 107, which was released in June, 2016.

Here’s a quick summary of the new rules:

For more details on Part 107, visit the FAA website.

To learn about how new drone laws are impacting business operators and consumers, check out our Roundup of The Best Regulation & Safety Articles of 2016.

How To Get Your FAA Remote Pilot Certificate (RPC)

You can obtain your remote pilot certificate in one of two ways:

If you have your Part 61 certificate (non-student), then you’ll get a temporary remote pilot certificate immediately when you apply for a permanent certificate.

Other applicants can get a temporary remote pilot certificate after completing a security background check. The FAA says it will take about 10 business days after receiving a completed application to issue the temporary certificate.

Check out our list of the top 50 UAV pilot training courses to learn where to get trained & certified.

Are You Working Or Playing?

The FAA and the Dept of Transportation makes a clear distinction between hobbyist and commercial drone / UAV operation.

Use this chart to find out where you fit. 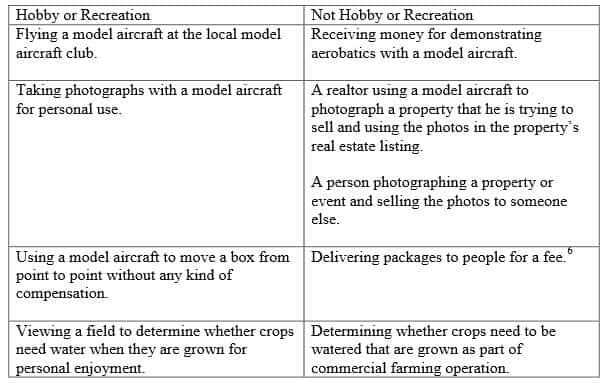 If you are operating commercially, make sure you have an operator’s certificate and understand the laws in your state or you could find yourself sued into the poor house – or in jail.

Where Can You Fly?

The FAA has an online no-fly zone map that will help you know the red zones to avoid.

The 3 areas you can never fly a drone in include US Major Airports, military bases and US National Parks.

The FAA has released their B4UFLY app on iOS and on Android. The app offers several features for drone/UAV pilots, including:

Here are some screenshots:

Know Before You Fly

Know Before You Fly is an education campaign that gives unmanned aircraft system (UAS) operators guidance and information to help them fly safely and responsibly. The program covers recreational, commercial and public uses.

Know Before You Fly was founded by the Association for Unmanned Vehicle Systems International (AUVSI), the Academy of Model Aeronautics (AMA), and the Small UAV Coalition in partnership with the Federal Aviation Administration (FAA).

Don’t Rely Too Much on GPS Autopilot

GPS-directed autopilot is a God send for commercial and hobbyist drone operators, but the truth is that GNSS signals are very weak and prone to interference from all sorts of naturally occurring things like solar storms, RF noise, bad weather and tall objects.

During autopilot flight, your GPS signal WILL fail from time to time.

The question is, how will your drone deal with the signal loss?  Will it automatically return home or temporarily stop and hover? Or will it continue flying in a straight line until the battery dies, then fall?

Older GPS autopilot systems and ground stations lack sophisticated Emergency Landing, Auto Return Home and Stop and Hover modes for handling GPS signal failure. Preferably, these modes can be activated automatically under certain conditions and via a dedicated button on the controller.

If you’re buying a new drone, then get one that has these features – for everyone’s sake.

Flying Near People? Use Your Prop Guards.

I think it’s safe to say that most drone operators underestimate the damage that small plastic or carbon fiber props spinning at 10,000 RPM can do to a person.

Truth is, unguarded props running near full speed (like when you’re trying to recover) can easily slice through flesh and arteries and seriously injure.

Watch these videos if you don’t believe me.

The bigger the drone and the longer the propeller, the more damage it will do. Carbon fiber props are the worst, due to their strength. If you sharpen your prop edges, you’re adding to the problem.

So use your prop guards whenever flying near crowds or people.

Flying FPV?  You Must Use a Spotter

FPV based piloting – especially using goggles – is not like line-of-sight piloting, in several ways:

This is why having a second person acting as a spotter is a must.

The FAA requires it, if you are using FPV Goggles.

Use a Black Box Flight Recorder

It may sound counter-intuitive, but recording your flight path is your best defense if you are accused of illegal flight activity. Add a black box flight recorder with GSM/3G transmission capability (in case your drone is confiscated).

A good choice is the Flytrex Live 3G black box module (about $200), available for most popular drones.

Flying Commercially? Register Your Drone With the FAA

On Dec 12, 2015, the Federal Aviation Administration (FAA) announced its proposed drone or unmanned aircraft system (UAS) registration rules, including naming who will have to comply with them.

Which was everyone, at that time – hobbyists and commercial fliers.

Later, in May 2017, the FAA updated the ruling so that the following registration requirement now applies to commercial drone operation only.

Obviously, this registration thing is still in its infancy, and so far there’s no way for the FAA to know whether all existing drones have been registered, or not.

That said, if your unregistered drone injures someone or falls onto someone else’s property after doing a bit of illegal mischief,

You have been warned.

Get A Commercial UAV Operator’s License (US)

You may not need a full-blown UAV Operator’s license to operate your drone. But consider getting one anyway.

It isn’t that hard or expensive to get, and you’ll learn all the reasons why flying in certain areas and conditions is not only unsafe, but could kill someone. It will make you a smarter operator.

Just in case you need a reminder why safety and insurance are so important, here are some of the finest drone crashes ever, compiled into a single 20-minute video: