Most of the top drones sold today weigh less than 2Kg and have many utility limitations. But a new crop of heavy-duty drones is pushing the edges of what drones can do from fighting fires to rescues. They can stay in the air for hours and lift hundreds of pounds.

Traditional consumer drones can typically lift only 1-2lbs of equipment like cameras and sensors. This limits their usefulness in many situations.

For instance, while you can monitor a fire with a DJI camera drone, it cannot lift a hose to douse the flames. In search and rescue, an ordinary camera drone may be able to spot someone in trouble but only someone on the ground or a helicopter can actually rescue them.

These new heavyweight drones do much more than a monitor and analyze. They can get into the thick of the action as well. They can fight fires, de-ice frozen turbines, carry heavy supplies and even lift someone to safety.

One of the best-known makers of heavy-duty drones is Aerones. They make several types of drones for use in different applications.

The drones are connected by an electric cable to a generator on the ground. So they can stay in the air for much longer than smaller drones which typically have a 10-30 minutes flying time.

The drones have several other modifications to extend their utility to many new areas. For instance, wind turbine maintenance drones are fitted with a hose that can carry water, cleaning liquids, or de-icing chemicals over a height of 100m to reach turbine blades.

A high-pressure pump on the ground provides the necessary pressure for liquids to climb the distance and clean or de-ice the turbines.

The industrial cleaning drones use the same mechanism to clean skyscrapers, tall grain storages, and other tall infrastructure that would normally require manual cleaning or a helicopter.

The fire-fighting drones can climb as high as 500m and carry a load of 300kg. They can withstand high temperatures and maneuver through tight spaces. They have thermal cameras to identify hot spots and provide a live analysis to firefighters on the ground. 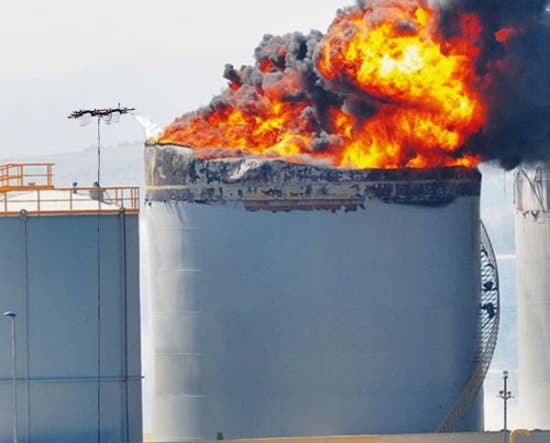 To build heavyweight drones that can do all these things, Aerones and other drone manufacturers have to incorporate different technologies from those used in traditional drones.

For instance, Aerones drones have plenty of redundancies built in to ensure full safety in case something goes wrong. There are two controllers in case one is damaged. Three parachutes automatically control the descent of the drone should it lose control and start free falling.

A whooping 28 motors ensure that the drone stays up even if some of the motors get damaged.
If there is no power supply from the ground, the drones have batteries that can provide 20 minutes of flight. That’s enough time to safely land the drone.

These drones also have multiple locational and signaling methods to account for every situation. Aerones drones use a cable to carry signals to the drone. Unlike GPS, these signals cannot be jammed.

If the cable fails, the operators can control the drone via RF. There is also radar to help the drone stay aware of its location even in thick smoke.

The drone industry is quickly spreading to new frontiers. With this growth, we can leave more and more tasks that are traditionally expensive and risky to carry out to drones.

If drones can effectively put out fires, rescue people, deliver supplies in remote areas, and help maintain infrastructure, the less need there will be to put human lives in danger.

Smaller drones are by no means becoming less useful. They are still important in their own ways and in some cases can even work together with their larger siblings. In a search and rescue scenario, for instance, the smaller drone could do the searching, and then the larger one is sent in to do the actual rescue.

We are just beginning to see how useful drones, of all kinds and sizes, can be. There is still so much more we can do with them.