UAVs in agriculture, construction and other sectors are increasingly using AI-powered drones to improve data gathering and analysis. This partnership between drones and artificial intelligence carries new benefits as well as some concerns.

Around 100 meters over the arctic, a drone flies almost silently over the vast glaciers.

Down below in a boat researchers excitedly point to a green outline against a cold blue background on a screen. The drone has just spotted a bear thanks to an infrared camera onboard the drone that can easily pick out the perfectly camouflaged white bear against the white arctic ice. 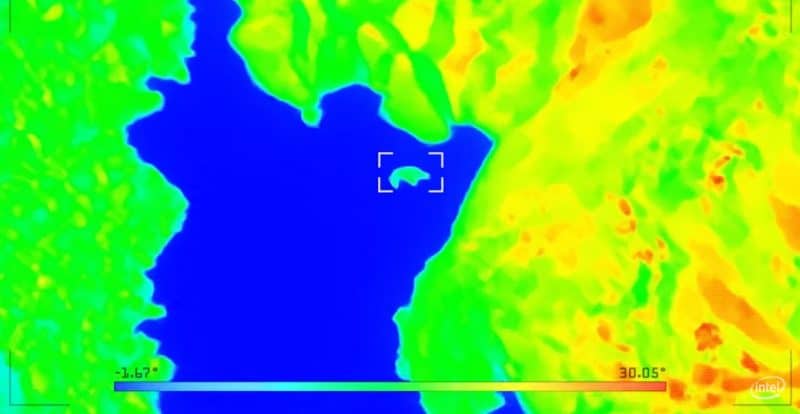 This is a mission by wildlife photographer, Ole Jørgen Liodden and sponsored by Intel. In fact, the drone spotting bears from air is Intel’s Falcon 8+.

The company sponsored the mission to help improve what we know about polar bears especially as they face the specter of climate change. Using a drone provided the most efficient, cost-effective and non-intrusive way to study them.

The drone is not just taking infrared shots of bears. It is collecting a lot more data on bear communities in the arctic. This data is then fed to an AI program that analyzes it to learn about the movement, feeding and reproduction habits of the animal.

This data will be a goldmine for wildlife and environmental researchers as they seek new ways to protect the climate-threatened populations of bears.

Far from the frigid arctic air drones are being used to carry out rail inspections.

BNSF Railway, with miles and miles of railway to inspect, had to turn to drones to improve efficiency and accuracy. But they are not just using any kind of drones, they are AI-powered drones.

It’s not enough for a drone to take high-resolution pictures of the railway, you need eyes fast enough to study the pictures and make quick decisions.

AI software is the only one fast enough to study over 300GB of images and make instant decisions regarding the state of different sections of the railway line.

A New Frontier for Drones

These two are not isolated cases. In different industries, companies are increasingly turning to the combined power of AI and drones to carry out big projects more efficiently, in less time, at lower costs and with greater accuracy.

UAVs in agriculture powered by AI are making crop management easier and more efficient. Agricultural drones fly over the farms, collect different data points and automatically analyze them into detailed maps and recommendations for farmers.

Some companies are using drones in construction sites to improve efficiency and thus reduce construction time and save costs. Others, like BNSF Railway, use drones to inspect their installations and automatically generate useful reports.

These drones can be used to inspect wind turbines, bridges, roads and cell towers. Unlike human eyes looking at a live videos or images, AI can recognize even the smallest of anomalies and alert the operators to it. 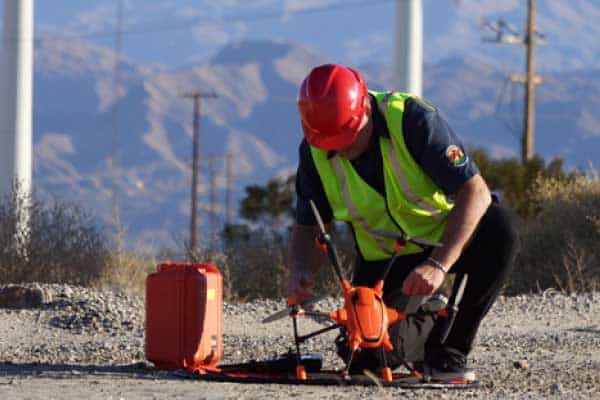 In the future companies will be able to deploy a swarm of AI-controlled drones that can inspect a wider area and coordinate with each other to provide even more comprehensive analytics. Data that would have taken months to collect and assess will take just a few hours or days without putting anyone in harm’s way.

Implications – Both Good and Bad

One somewhat interesting consequence of using AI in drones is that operator expertise will no longer be that important. If a drone can take off, collect data and land on its own, what’s the use of an operator?

Sure, it seem crazy right now to write off human drone operators especially given FAA’s strict rules. But self-driving cars are quickly becoming a reality. So why not drones especially if they are proven to be safer than human-flown drones.

There is also the risk of people turning AI powered drones into weapons. For instance, swarms of drones could be used to stage attacks or cause disruptions. This is something that popular figures including Elon Musk have warned about.

Generally however, there a lot of good that can come out of using AI in drones. In some situations it could even save lives.

As the technology gets better and more refined expect to see more applications in new areas.

In a few years we’ll have completely autonomous drones that can do all sorts of things. From search and rescue to farm management to environmental research, they’ll prove even more useful than they already are today.