Much has been said about Amazon’s future plans to make deliveries via drones. But the reality is that Amazon Prime Air, as Amazon calls the program, will remain a fantasy for several more years. Regulatory support is still far off and there are some pretty huge hurdles for Amazon to figure out before they can fly swarms of package-bearing drones in the sky.

But we have a glimpse of what that future will look like. Amazon has filed a patent describing self-destructing drone technology.

The patent specifically describes a “Directed fragmentation of an unmanned aerial vehicle.”

What is In the Patent?

The description of technology that allows unmanned aerial vehicles to detect a flight problem and automatically self-destruct in a safe manner.

The patent describes a flight controller, which determines the flight path and controls the entire flight operation, and a fragmentation controller.

How Does This Help Amazon?

Amazon has been hard at work developing and promoting their drone delivery system. They even have a dedicate page for it on their website and a few videos to showcase their innovations.

One of the biggest challenges that Amazon Prime Air faces is safety. Drones can fail midair and with an increasingly crowded airspace, drone collisions will become more common. What happens if an Amazon UAV suddenly starts falling out of the sky? Wouldn‘t it injure people below or cause damage to property?

That’s the scenario Amazon is trying to avoid with its latest innovation. If anything disrupts the drones flight – be it component failure, lack of signal, adverse weather conditions or a collision with a bird or another drone – the drone responds automatically by self-destructing.

How Would the Self-Destruction Technology Work?

The defragmentation is essentially a failsafe trigger. In perfect conditions, the drones will be able to take off from Amazon fulfillment centers carrying packages, plot their way to the customer’s address and drop the package at a designated point before making their way back to the fulfillment center.

I’m assuming they will be drones with camera and GPS as well as sensors. So they can easily map their flight path and avoid obstacles like most professional camera drones.

But all sorts of things can happen in the air. The weather can be too windy, it can collide with birds, someone might hit it with something and so on.

But it does not just break apart randomly. After all, even single components can cause serious damage when falling from height.

The defragmentation controller takes into account the topology of the current location, flight conditions and other factors to decide where to drop off the first component. It chooses somewhere safe such as a lake or tree.

The controller then re-calibrates, again checking flight conditions and the surrounding environment to decide where to drop off the next component. Here’s Amazon’s handy illustration. 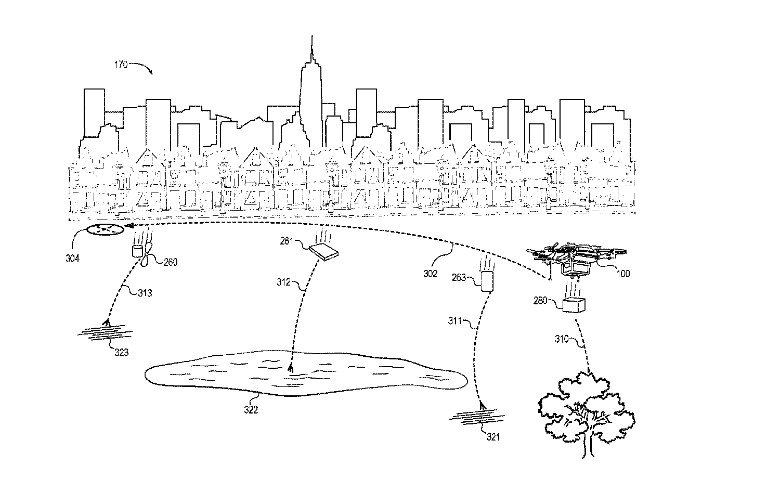 When Will They Start Using It?

There are good chances this technology will never see the light of day. Big companies like Amazon regularly file patents they will most likely never use. Amazon has in the past filed similarly eye-popping patents such as drones that recharge electric cars and airborne warehouses.

So this could just be a safe bet in case they ever need to use it.

Amazon is currently fine tuning their drone delivery system and it will be some time before it’s ready. One of the biggest challenges they face is convincing the government and local authorities that their drones will be safe.

This defragmentation technology is just a look at what they are doing behind the scenes to achieve that. It may very well go on to become an essential part of their drones or it may remain just a brilliant idea.