If you want a good flying camera drone, you know where to go.

With each drone they’ve kept drone enthusiasts and pros excited with the new tech and features. One of the areas DJI especially excels at is obstacle detection.

They equip their drones with GPS and a bunch of sensors that allow them to smoothly evade obstacles and even fly autonomously for short periods in certain modes.

For the most part however you have to actively maneuver the drone.

Skydio is a California-based startup that has received financial backing from some big names including Nvidia, Andy Rubin (creator of Android) and Justin Timberlake. No, the last one was not a typo. Even Magic Johnson is chipping in.

The company’s mission is to create intelligent drones that anyone can fly.

With just the first product they seem to have largely succeeded. 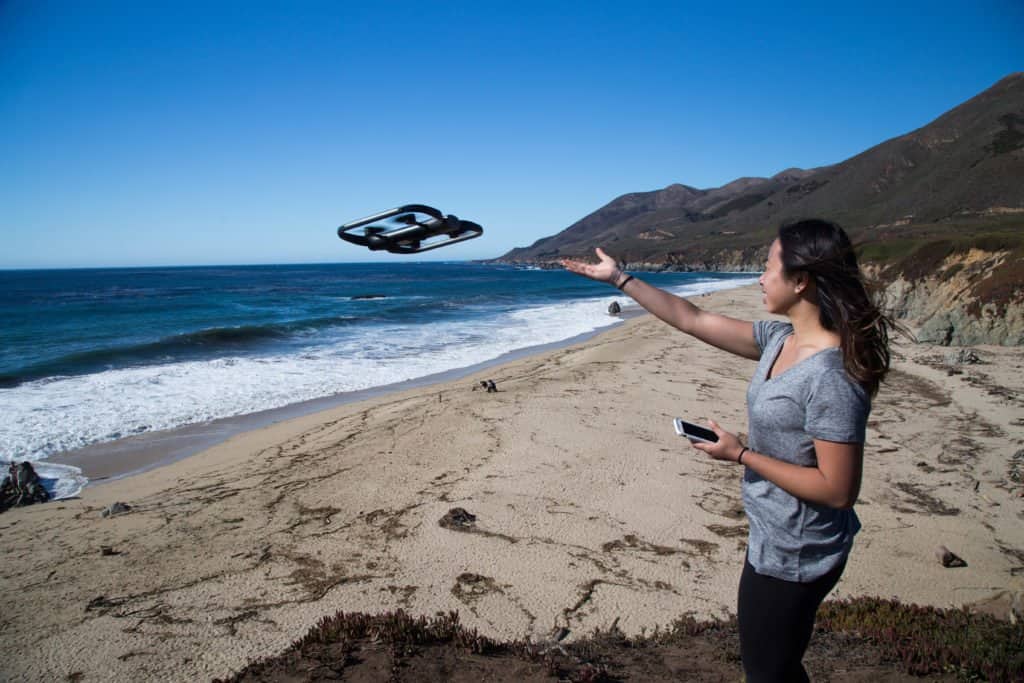 The Skydio R1, the company’s first consumer product, is really an amazing drone. Just check out this video of the drone deftly following a cyclist through the trees without crashing. Its movements are so fluid and smooth.

A bunch of testers have taken the R1 out into the wild for testing and it has surpassed expectations every time.

What makes it so good?

Well, let’s start with the fact that it has 13 cameras on board facing all directions. At any moment when it’s flying, it has a visual map of the area.

Complicated algorithms then process the incoming images and direct the drone in the right path.

The drone’s biggest feature is its ability to keep track of you through all kinds of obstacles. That’s why the company is marketing it as a great choice for action sports.

But the biggest selling point of the R1 is its ease of use. You’d expect that with all the tech, it requires a lot of training before anyone can fly it.

Unlike traditional drones, you can simply pick up the R1 and fly it with absolutely no experience at all.

It doesn’t even come with a controller. Instead, it links to your phone. You then control it – and by control I mean tweaking a few settings, not maneuvering it – from a companion smartphone app.

The drone can take off from practically anywhere be it a flat surface of the ground or your palm.

Once it is in the air, you can select from several flying modes.

The main one is the follow mode where it follows you. In the lead mode it goes ahead of you and predicts what path you’ll take. You can also get it to fly alongside you in side mode or around you in orbit mode. If you want it to shoot from a fixed point of view there’s tripod mode.

You can also adjust the angle of the shoot and zoom in or out using the app.

The app indicates people in the drone’s view with crosshairs. By tapping one of the crosshairs, you can get the drone to automatically follow that person.

With a max speed of 25mph the drone has no trouble keeping up most of the time. But if you go too fast it might lose you and stalls until you reappear into the frame.

These settings and modes create some pretty cool cinematic effects.

However when it comes to camera quality, DJI still has an edge. Though the R1 has a 4K camera, the image quality is not as good as that from a Mavic Pro.

It’s a bit shaky and the colors are not as sharp. It also only offers a wide field of view.

But anyway the R1 is meant for amateur drone enthusiasts especially those who are into action sports like skating, cycling and running. It’s not for pro photographers.

Skydio says they will make a lot of improvements in future updates both in terms of hardware as well as the software and algorithms.

The $2,499 price tag is mostly out of reach for most of us drone enthusiasts. But Skydio says prices will come down with future drones.

For now I’ll just watch cool Skydio R1 YouTube videos like this one until I can afford it.